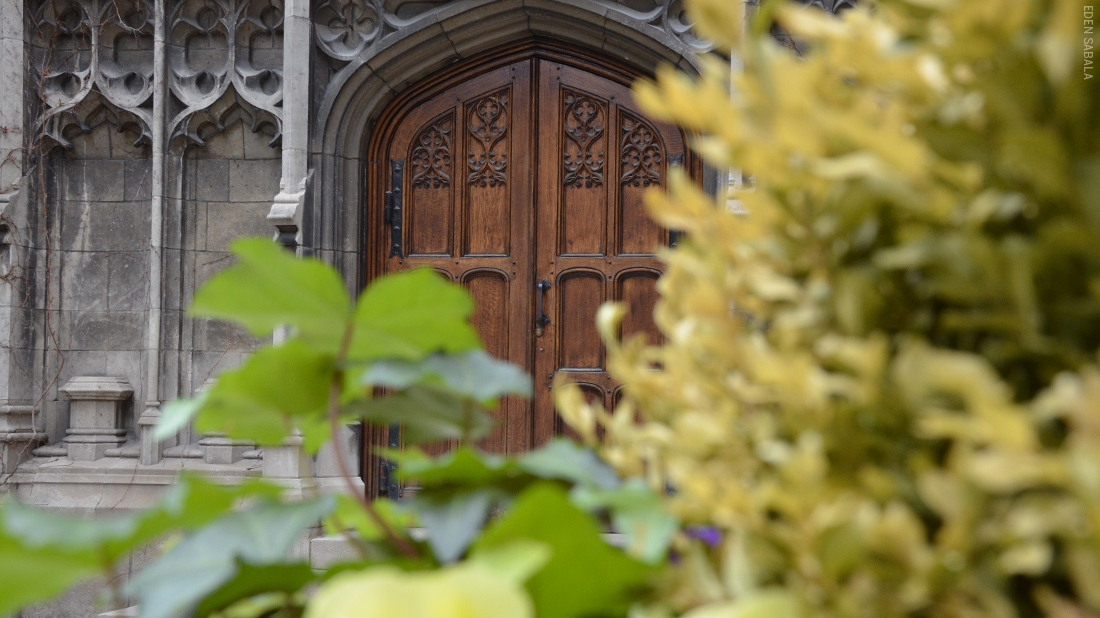 Joseph Bond Chapel was completed in 1926, just as Rockefeller Chapel construction was beginning. A jewel of the late Gothic revival by Coolidge and Hodgdon, Bond is named for a founder of what became the University's Divinity School, and has been used for diverse ceremonial and spiritual events since its first years.

One of the University Chapels operated by Campus & Student Life, Bond Chapel welcomes weekly reflective gatherings and many moving ceremonial occasions. It is widely used by members of the University for weddings and memorial services, and for religious practices of the diverse traditions represented on campus. It is also a sought after destination for intimate concerts and other artistic events. Its location near Goodspeed Hall makes it an attractive venue for Department of Music performances, and it readily attracts bookings from affiliated professional musicians and resident artists visiting the University. It is a frequent nexus of exploration and practice by members of the University's Divinity School.

See our visitor page for the schedule of public access hours.

Memorial activities at Bond are currently limited to those requested and sponsored by University departments, and are held at a later date from the passing, customarily during the academic year (October-May) when colleagues and students can attend. Please be in touch with the school or division of affiliation, which can in turn reach Matthew Dean; additional details are here. In the case of a more immediate memorial need within the campus community, please reach Shaundra Cunningham, associate dean for congregational life.

For information about weddings, please see our weddings page. Ceremonies are Bond are reserved exclusively through the Rockefeller Chapel office.

Bond Chapel was designed by the architects Coolidge and Hodgdon, who also designed the adjacent Swift Hall, the University's Divinity School. The chapel was given by Mrs. Joseph Bond in memory of her husband, a former trustee of the Baptist Theological Union, the predecessor institution of the Divinity School. Mr. and Mrs. Bond’s daughter, Elfleda, married Edgar J. Goodspeed, a member of the university faculty noted for his translation of the New Testament. After Elfleda’s death in 1949, Mr. Goodspeed donated the stained-glass windows in her memory.

Bond Chapel became the home of the Reneker pipe organ, rededicated in its new setting in 2013. At the same time new furnishings were provided by a generous gift from the Women's Board of the University of Chicago. The custom-made chairs were made in a style and finish honoring the traditions of the Chapel while making possible the flexible use of the building for new generations. The seating may be arranged in antiphonal style for an organ recital, or in traditional chapel format for a wedding, in a semi-circular format for a spiritual event, or placed to the side to allow for open space use. 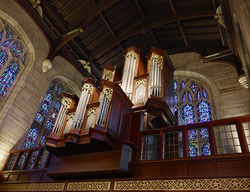 The Reneker organ, inspired by instruments built in northern Germany in the seventeenth and eighteenth centuries, was built by Canadian master organ builder Karl Wilhelm in 1983 for Graham Taylor Hall at the Chicago Theological Seminary, which is now Saieh Hall. It was dedicated there in 1984 in honor of the late Robert W. Reneker and Betty C. Reneker, and was moved to Bond Chapel in the autumn of 2012.

In 2018, the Schlicker organ which formerly occupied the Bond Chapel balcony was successfully restored in the lower level of Rockefeller Chapel. Please contact Matthew Dean to coordinate a visit to this or other historical instruments in the Chapel collections.

The commemorative program from the Reneker rededication on February 2, 2013, the 100th anniversary of the birth of Betty Reneker, may be downloaded here.