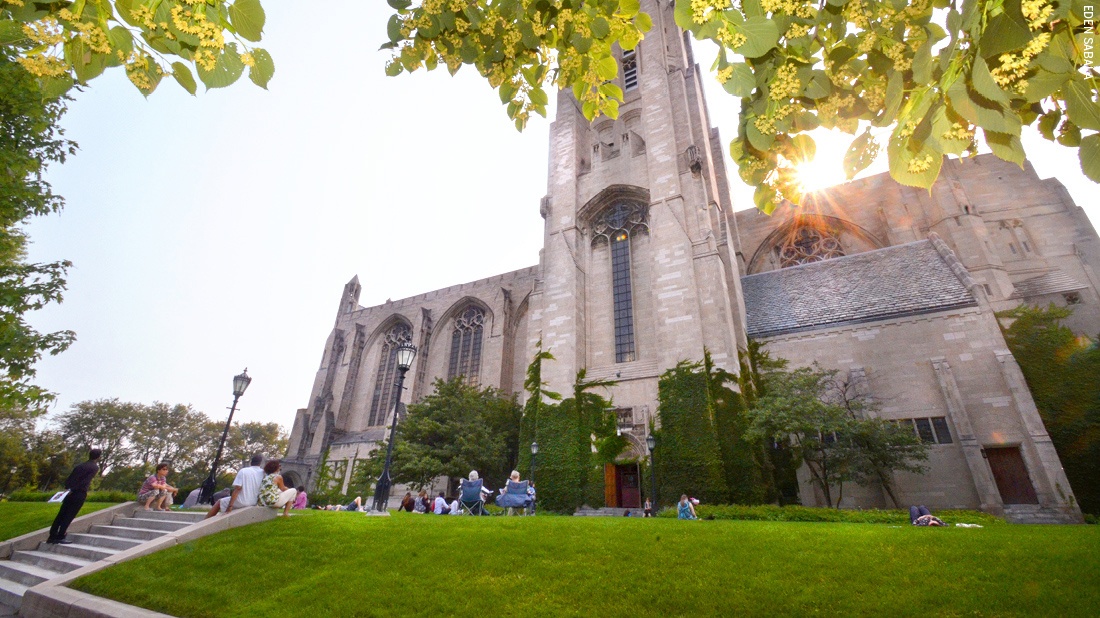 Rockefeller Chapel - originally University Chapel - was designed by famed early 20th century architect Bertram Grosvenor Goodhue. It was completed in 1928, the final gift to the University of Chicago from benefactor and founder John D. Rockefeller, for whom the Chapel was renamed after his death.

Built entirely of stone, with the exception of steel supports for the tower’s carillon and roof, it is lavishly decorated on the exterior with sculptures representing the humanities and the sciences. The tallest building on campus and among the tallest church structures in Chicago, its tower stands 207 feet high and can be ascended via a spiral stone staircase of 271 steps.

Rockefeller Chapel is 265 feet long and 102 feet wide at its widest point. The interior ceiling (a false ceiling, inside the roof) is nearly 80 feet from the floor. The Chapel weighs 32,000 tons, and 56 concrete piers carry the foundations down to bedrock 80 feet below the floor. The walls contain 72,000 pieces of Indiana limestone, and the ceiling is decorated with 100,000 pieces of colored Guastavino tile.

More than one hundred stone sculptures decorate the outside of the Chapel, designed by Lee Lawrie (1877–1963) and Ulric Ellerhausen (1879–1957). Although the sculpture is archaic in style, the subjects chosen are drawn from 20th century life as much as from ancient religious allusion, making for an unusual mixture of themes. For example, over the west nave entrance (where students enter for their orientation), are images of two past University of Chicago students watching over their successors. Laurens Shull, who carries the arms of the United States on his uniformed shoulder and was killed during World War I, stands on one side, and Margaret Green, who died of pneumonia during her senior year at the College and holds the troth of truth flanked by the University arms, on the other. Both were leading personalities of the student body of their day, fully identified with the intellectual, social, athletic, and religious life of the University.

On the east side

The covered doorway at the circular driveway is guarded by figures representing day and night. The east aisle entrance is flanked by figures of Dante and Milton, with the lily of Florence beside Dante and the arms of England beside Milton. In the springs of the arch above this door at the coats of arms of the universities of Salamanca (left) and Padua (right). 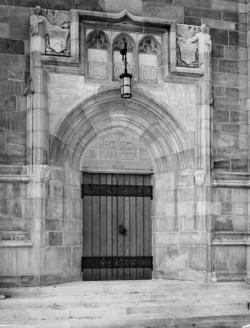 The east tower entrance bears images associated with the conversion of the Emperor Constantine in the fourth century CE. Beside the door are images of Presidents Wilson and Roosevelt, two presidents who carried the spirit of their education into public life. Behind each man is the coat of arms of his university (Princeton for Wilson, and Harvard for Roosevelt). Below are the arms of the United States and of the University of Chicago. In the spandrels of the arch are, to the left, Athens, ancient city of learning, and to the right, Chicago, contemporary city of learning. The coats of arms in the window above are those of the universities of Tokyo and Berlin.

On the south side

The statues in the gable form a parade of religious figures across time and place, ranging from the time of Abraham to that of the Reformation, with Plato and Zoroaster representing traditions outside of the Jewish and Christian traditions which dominate the early 20th century choice of figures. This March of Religion comprises, from west to east, Abraham, Moses, Elijah, Isaiah, Zoroaster, Plato, John the Baptist, Christ, Peter, Paul, Athanasius, Augustine, Francis, Martin Luther, and John Calvin. 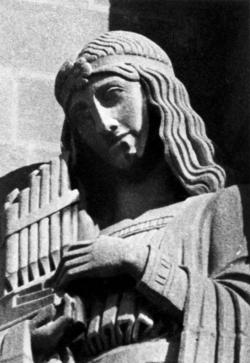 At the spring of the south window arch are female figures symbolizing music and devotion. Cecilia, patron saint of music, holds a musical instrument. Monica, known as the mother of Augustine who has much to say about her in his Confessions, here represents devotion.

The three pairs of figures below Monica and Cecilia are (at the bottom) the apostles James and John; the prophets Amos and Hosea; and the martyrs John Huss and William Tyndale.

Winged figures at the spring of the doorway arch represent the angels Gabriel and Raphael, with the archangel Michael at the center.

On the west side

On the northwest corner of the Chapel is an outdoor pulpit, designed as part of a large cloistered area intended to be built to the west but never erected. The coats of arms above the pulpit are those of Michigan (left) and Indiana (right).

At the west transept are to be found images of the scholar, with a pen; the administrator, with a diploma; and the scientist, with a vial. At the base of the window are images of mercy (left) and truth (right), and above these, righteousness and peace. 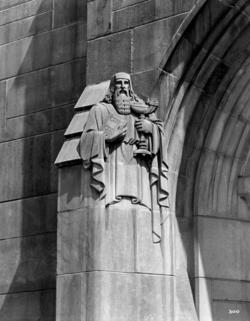 By the west narthex entrance are figures representing learning (left) and service (right), two aspects of student life which are greatly emphasized at the University.