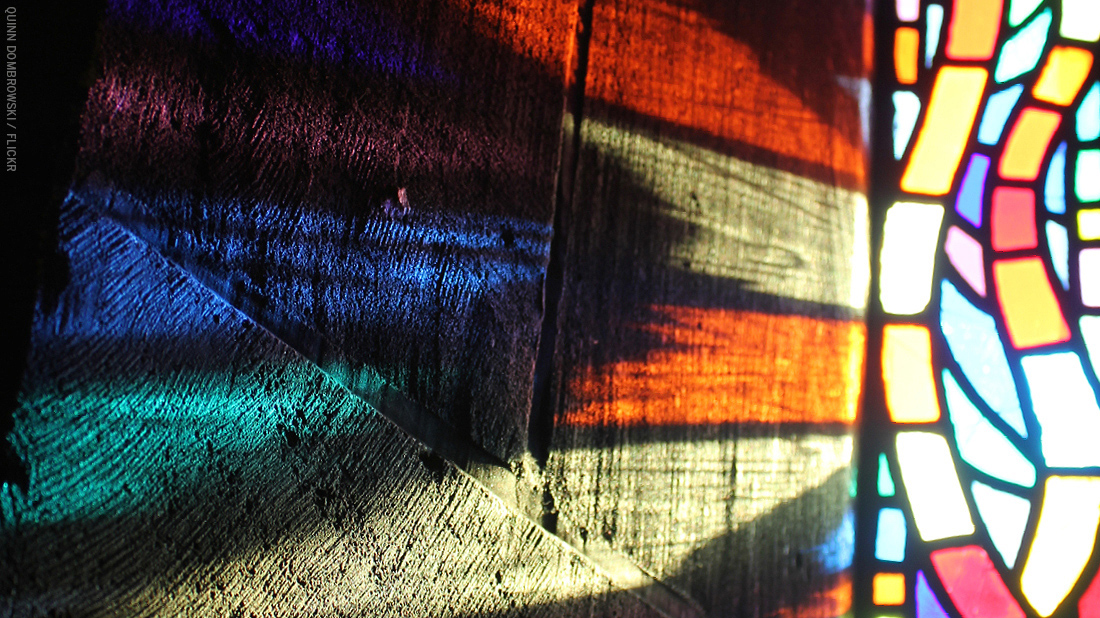 The interior of the Chapel is noted for its intricately carved woodwork, its magnificent organ case, its unusual tiled ceiling, and its soft pastel windows. As is typical of Gothic cathedrals, the height of the nave (at 79 feet, 5 inches) is approximately twice its width (41 feet between the piers), and its length (231 feet, 6 inches) is almost three times its height, wall to wall.

The white Appalachian oak woodcarvings that adorn the organ and south balcony were created by Alois Lang (1872–1954), one of the artists responsible for bringing the medieval art of ecclesiastical carving back to life in the 20th century.

The interior stone sculptures were designed by Lee Lawrie and Ulric Ellerhausen, designers of the exterior sculptures. In the corbels supporting the west transept gallery are representations of oak and lily, for strength and beauty. At the west transept doors are carvings of priest (left) and prophet (right). At the east transept doors are carvings of J.S. Bach (on the left, representing the central place of music in the Chapel’s programming), and Bertram Grosvenor Goodhue, with a model of the Chapel (on the right, representing the architecture) and, behind him, the image of West Point Chapel, Goodhue’s other great academic chapel. The shield above this entrance bears the coat of arms of the University of Chicago. In the great lancet above this door are figures of sage and psalmist. 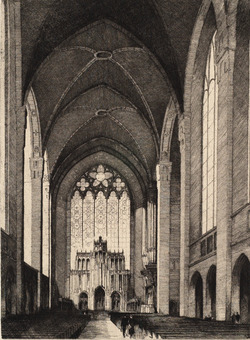 The Rockefeller pulpit was restored in 2015 to its original marble configuration: a hexagonal space, visible from every seat in the Chapel. The marble was cleaned and reasssembled by historic restoration specialists Daprato Rigali Studios (founded 1860), with a new floor and replacement reading stand. The marble closely matches that used almost a century ago across the front of the Chapel.

The long-planned restoration project also included the removal of a carved wooden door and canopy. Early photographs and etchings show that the canopy was added after the Chapel's dedication (Goodhue himtself died shortly before construction was begun, but after having completed his drawings). The wooden canopy has been preseved onsite along with its documentation for historians and scholars.

The elaborately carved reredos on the north interior wall of the Chapel, with its empty niches, was originally planned to hold statues of preachers of the Christian faith. These statues were never constructed, however, and given that the Chapel is used today by members of many different religious and spiritual traditions, the absence of iconography representing one particular tradition is now appreciated. 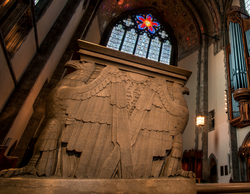 At the foot of the lectern can be found two eagles, and at the base of the pulpit, emblems of the four evangelists of the New Testament: the angel (Matthew), the lion (Mark), the ox (Luke), and the eagle (John).

On the carved organ screen in the chancel are Jubal, the “father of all such as handle the harp and the organ” (Genesis 4:21), some trumpeting angels, and a pineapple and rose.

The vaulted ceiling was designed by New York artist Hildreth Meiere (1892–1961), prominent American muralist famous for her Art Deco mosaic work. It is the only known example of the use of colored glazed tile in a Gothic vaulted ceiling. 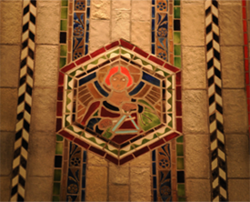 On the rib vaulting of the ceiling are medallions representing emblems of the universe as the object of human study: bird, beast, fish, reptile (repeated over the nave); and sun, moon, star, tree, flower, air, water, and fire (repeated over the chancel). There are also angels with musical instruments, including the tambourine, drum, pipes, horn, lyre and triangle. 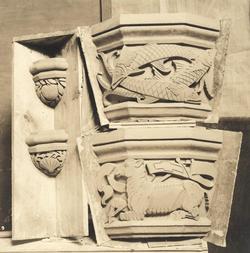 In the corbels of the great arches are angel, lion, ox, and eagle; olive, thorn, shell, and apple; and dove, pelican, fish, and lamb. Images of wheat and grape, alpha and omega, and the letters IHS (a Greek abbreviation of the name of Jesus) appear on the corbels of the lateral wall ribs.

The stained glass windows in soft greens, blues, and mauves were designed by the architect, Bertram Grosvenor Goodhue, and the largest stretches to the great height of 46 feet, 3 inches. The pastel colors were employed to assure maximum light and minimum distraction from the interior architecture and sculpture. The choice to have patterned rather than historiated windows was carefully made, and contributes to the flexible and welcoming environment of the nave today. 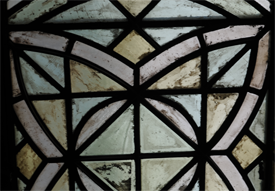 Approaching the fiftieth anniversary of the Chapel's completion, art professor Harold Haydon (PhB'30, AM'31) designed colorful accent windows to add some jewel tones to contemplative areas while replacing some damaged original panes. The first was installed in the door of the Office of the Dean in 1971, and inspires the palette of the current Rockefeller Chapel logo. The lancet windows in the aisles were added in 1972 in two installations, Creation and The Path, with abstract references to the elements, the cosmos, and human creativity. Finally, the class of 1928 underwrote the installation of Light and Fire for their shared fiftieth anniversary with Rockefeller Chapel, which was then completed in 1979. This central sun above the altarpiece replaced the original cinquefoil window, which is preserved in our archives.

On the gallery organ screen are depicted images representing New Testament parables, emblems of the evangelists, and a thistle, butterfly, peacock, pomegranate, and loaves and fishes.